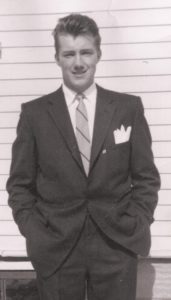 My name is Milton Ben Grenville Brown, I’d like to introduce myself. I was born in a farmhouse in the then small community of Grande Prairie, Alberta during the depression era. I prefer to be called Milt.

As far as education, I completed grade 11 but had no interest in going back. I had in mind however, working in an office .Nowadays a grade 11 education wouldn’t get you that. I started as an office boy with an insurance company, The Canadian Surety Company. Had a great boss, Ted Cox, a mentor. I worked my way up the ladder and ended up overlooking insurance claims. I enjoyed that. I did a few simple investigations but farmed out most claims to independent insurance adjusters.

I remember an important principle that Mr. Cox passed on to me when I first started handling claims. He said: “ Milt, when a policyholder has a claim, always be fair and allow him what he is entitled to.” I have always tried to follow that code.

One of the independent adjusting companies I referred business to was called S.J. Kernaghan Adjusters & Co Ltd. I got to know them, at first only two or three men, including Stan Kernaghan. I never called him Stan. It was always, Mr. Kernaghan.

One day Mr. Kernaghan called me and asked if I would like to join his company. I had not ever anticipated that. This for me was a big decision. A young married man with a mortgage etc. So, I did the unlikely, I went to Mr. Cox for his opinion, my boss! Here’s what he said: “ Milt, I would never stand in your way if you wanted to choose another course in work, but, if it is not one of three independent adjusting companies I will name, I would not recommend that you leave. “ One of the three he named was S.J. Kernaghan Adjusters.”

When I left this company, Mr. Cox gave me a nice book that he personally autographed and wished me well. I subsequently met with Mr. Kernaghan and negotiated the terms of my job. As the saying goes, ‘ the rest is history.’ I spent many years there until the auto claims business, which was the bulk of our work, started to diminish due the founding of Manitoba Public Insurance.

Mr. Kernaghan had another idea. He wanted to form a Private Investigation company. He called it World Investigation Service. He asked me to head it up, from scratch, in Winnipeg. Initially most of my clients would be law firms, firms I , as an adjuster, had locked horns with many times when trying to settle claims. I began approaching them.

Part of my incentive for them to use me was that they could now benefit from an investigation that was thorough, one that would give them more than adequate information to successfully represent a client with his claim. I reminded them that the information they got from a police report was at best, poor. Their statements often failed to clearly establish liability. Gradually , lawyers started using World Investigation. They were pleased with the results.

So, in the series that follows, you will be reading about independent adjusting claims and  investigation cases that cross over from what I did as a private investigator .

The recent Ontario storm reminded me of a similar storm that hit Winnipeg many years ago; a hail storm. I think all of Winnipeg was affected, at least the number of claims that poured in seemed to suggest that. We scrambled to free up every adjuster. We worked night and day, seven days a week. As quickly as we adjusted the claims, twice as many more came in! We bought extra ladders , roof racks for our cars to carry them . Climbing onto roofs to examine the damage soon got rid of one’s fear of heights !

But as sometimes happens, a policy holder wants to take advantage of the situation and put in a claim that isn’t really a claim. One such person was claiming he had hail damage to his cedar siding. I checked it out. It almost looked like he used a ball-peen hammer to create the appearance of hail damage! There was also a lot of plain years of general deterioration. He needed new siding.

When I tactfully tried to tell him what he had wasn’t covered, he blew a gasket ! He used a number of four-letter words, in the presence of his young son and two ladies across the street! I suggested he tone down, but he became even more belligerent and ordered me off his yard. By now I’m tired, tired of climbing roofs, of inspecting damage, tired of this idiot. As I headed back to my car, I noticed he had freshly seeded grass on the boulevard in front of his property (city property!) He had it roped off to keep people off. I purposely walked over it! Well, a fresh barrage of cuss words came from him!  I turned around , standing in the middle of his precious , freshly seeded grass as he yelled at me to get off and said: “ I’m not on your property, come and make me!”

I was ticked to say the least . He did not respond. I then turned around and headed for my car, noticing the two ladies previously mentioned, were applauding me! He must have been one of those undesirable neighbors. No, I shouldn’t have reacted the way I did. But even adjusters are human!

In my next episode, I’ll tell about a storm of another kind which created the question ‘ what were the odds.’